This #v8577 pattern is among the series of “Very Easy Vogue” patterns, but somehow I spent weeks on it. I’d had my eye on it for a while, perhaps since my first year sewing when Vogue patterns seemed impossible, and I finally jumped into it. In theory, it was nothing difficult, but it still hung 3/4ths finished for weeks, waiting for buttons, waiting for a hem…

I hoped to test out some of my better sewing skills on this project, and I only sort of made it work. Things started well when I picked up this pink linen-ish material at a local designers end of season sale. While I was glad to pair this fabric with the pattern, my cat had other plans and threw up on it. I should have read this as a premonition that this project wouldn’t be as easy as advertised.

Many have voiced their interest in sewing this pattern alongside their hesitance that it takes up a lot of fabric–it does, almost 5 meters. That said, it also takes up a lot of tracing paper. The skirt is huge and tracing it is almost more cumbersome then cutting and sewing. Trying to find a place for my pattern pieces was a bother. At every turn, this project took up so much space, which made moving from one step to the other a challenge. These little hiccups can make me loose some tactility, but once everything was traced and ready to go, sewing the dress was fine. I didn’t make a muslin for the bodice, opting for some fit-as-I go. I measured, instead. The shoulder gathers, for example, work well with a large bust. I was able to adjust the shoulder length by cutting out a sizable piece off the edges. They hung a little like faux kimono sleeves on me. Then there were some adjustments I didn’t catch until after. The darts from the waist up could be lower (as I usually make them) and there is some extra fabric at the back of the neck.

I also veered off slightly from the directions. Although pattern instructions suggest a full lining, my fabric is very heavy so I only lined the bodice. I did a self lined yoke and drew front facings, then paired them with a light cotton. My insides are looking better and better, but I still don’t want to show it off in pictures. Another difference in construction is that I didn’t cut the back waist band, back, and yoke in two pieces, as the pattern suggests. I removed the seam allowance and cut them all on the fold. I prefer less seamlines, but really, the idea of getting everything to line up well was terrifying, so I made it easier.

Up until buttonhole sewing, I was feeling pretty good about the dress. However, there were more bumps to come. I followed the pattern button placement, and somewhat regret it. The spacing is a little awkward and the fabric doesn’t lay as flat as I wish it did–this almost ruined the pleasure of the dress for me. I’ve seen this happen with a few other versions, too. I hoped to avoid it, but wasn’t able. Although I’m liking Vogue patterns this summer, something about their button placement doesn’t sit well with me.

Lastly, the hem is as amateur as it could be. Yes, it is a little uneven. The skirt of this dress is HUGE. I felt like I was sewing a wedding dress together. It took up all my desk space, was on my lap, everywhere. So, hemming it was daunting and I just didn’t have the ability to get it really right with limited tools. Someday, I will fix it, but that day isn’t in this season.

The bumps in the process of sewing this dress slowed me down, and, after everything, that’s fine by me. The dress is so cupcake-y that I don’t even know where to wear it yet, and I was in no rush to take pictures. When I did though, I felt so nice. The dress is comfortable, soft, and just pretty. I’m glad to have made it. While I probably wouldn’t use the skirt again, the bodice design stays with me. I’m imagining a version with a short, straight skirt that could last throughout the year. 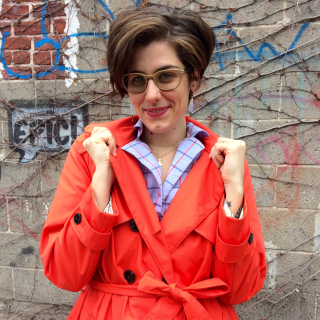